Are you considering the use of plastic belts on their spirals, either to replace metal belts on existing units or designing new spirals with plastic?

Are you considering the use of plastic belts on their spirals, either to replace metal belts on existing units or designing new spirals with plastic?

With new plastic materials, solid engineering and application support and very strong belt warranties, you should take a look at the use of plastic spiral belts on your next application.

If you have an application coming up for a spiral, let us take a look at it and we will give you a specific analysis of the belts you are considering for a specific product and environment. We can help you choose the best belt for the application.

The use of metal belts on spirals are well documented for their abilities and limitations.

Plastic spiral belts have not as much history, although in straight running applications plastic belts have proven to outwear metal by a 3:1 factor. Time will tell if this also applies to spiral radius belts 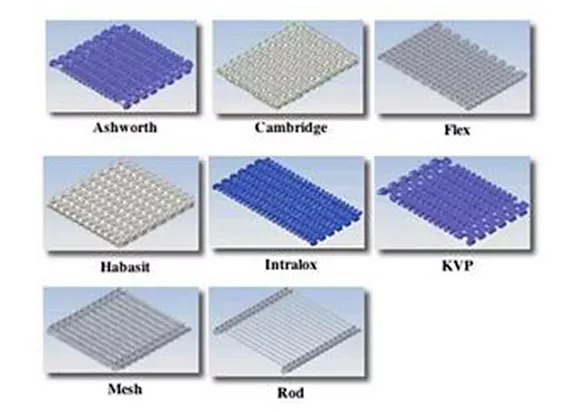 Belting Manufacturers
The various types and styles of belting that are available for the use of spirals. Unlike straight running conveyors, spirals can only use belts which can make a radius turn, which limits the types and styles that can be used on these systems.

Belts as listed by the manufacturer.

Ashworth
Cambridge
Flex
Habasit
Intralox
KVP
Mesh
Rod
The final decision of selecting a belt of your choice should be made between you, the manufacturer of the spiral and the belt manufacture. We also list a short description of the belts main characteristics for your initial evaluation, as well as a general comparison between plastic belts and metal belts.

If there are belt manufacturers which would like to be considered for listing and have not been included, please feel free to contact us. We have listed 95% of all spiral belts that are currently used on low tension spirals. We have not listed belts which are of special proprietary belt design which can only be used on a single type spiral.

Strength:
Advantage: Plastic
Currently, the strongest plastic belts are 550 lbs on plastic and 500 lbs on metal. Not all plastic or metal styles carry this rating. As strength itself is not the most critical factor (it is the radius weight rating which is), plastic belts have an advantage over metal.
Weight:

In weights, the lighter the better (assuming no strength loss). Plastics have it over metal.

Fatigue:
Advantage: Plastic
Plastic belts are not subject to work hardening as metal belts are, so the continuous cycling of the belt through the spiral does not have the same detrimental effect on the plastic as it does on metal.

A smaller collapse factor in a belt gives you a smaller footprint (smaller cage diameter possibilities), so metal has it over plastic (today).

Sanitation:
Advantage: Metal
The more open metal belts (rod type) are easier to clean than the most open plastic belts due to their construction.

Spiral Framework:
Advantage: Metal
Metal belts would generally be considered as less complicated on the frame construction primarily due to the belt support system used. A typical 36" wide metal belt takes 2 supports for this width, while it takes 3 to properly support a plastic belt (due to lateral belt deflection). This can be avoided with plastic by putting metal connector rods periodically into the belt (to obtain lateral stiffness).On the flip side of this, it could be proven in the future that while metal belts generally run on both horizontal and vertical plastic wear strips, a plastic belt could be run on metal structure only, eliminating wear strips altogether. Construction could then be easier with plastic.

Belt Speeds:
Advantage: Plastic
Plastic belting has proven itself to be a better alternative when the application calls for higher belt speeds, as metal belts have generally been used only in applications where these speeds do not exceed 150 FPM.

Lubrication:
Advantage: Plastic
With plastic belts, you do not lubricate at all. With metal belts, lubrication is required in certain applications in order to reduce friction.

Belt Life:
Advantage: Metal / Plastic
Since plastic belts have a lower friction factor and generally run at fewer belt tensions than metal, we expect plastic belts to outlast metal on a given suitable application, although plastic belts on spirals are still relatively new (13 years compared to 33 years on metal).
Heat:

Advantage: Metal
Metal belts are the best choice for now (over 220 F), due to both plastic material compositions and costs associated with high-temperature materials.

Radius Weight:
Advantage: Plastic
In all applications, available strength factors and expected belt tensions for both metal and plastic are related to the "radius weight factor" which is the weight of the product and the belt multiplied by its radius. A lighter belt allows for more capabilities.

Air Flow:
Advantage: Metal
The most open metal belts have better vertical air flow than the most open plastic belts, but most airflow patterns used today are horizontal, so review your application to see if this will have any effect one way or the other.

Advantage: Metal
Metal belts do not support a flame, while the standard plastic belts can.
Note: There are plastic belt materials which are self-extinguishing.

Particulates:
Advantage: Plastic
Metal belts can generate filings or metal particulates due to connector rod and link interface in certain applications. This is not an issue with plastic.

Repair Ability:
Advantage: Metal
Since plastic belts are modular in design, maintenance and repairs made in the field are easier and quicker than metal belts. No special tools, grinding or welding is necessary.

The More You Know About Freezers
The More You Will Look To Advanced Equipment Inc. as Your Reliable Supplier

Scroll To Top
We use cookies to ensure that we give you the best experience on our website. If you continue to use this site we will assume that you are happy with it.OkNoPrivacy policy
You can revoke your consent any time using the Revoke consent button.Revoke cookies